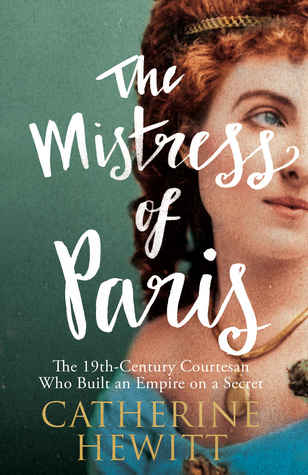 The Mistress of Paris

Art, then art, then more art

Leave it to me to complain about art first thing, but the thing that most annoyed me about this book was that in the glossy art pages, the portrait by Jacquet (I think) was nowhere to be found, despite how often it was mentioned in the book. If you’re going to read about the same piece over and over, it’s annoying to not see it.

And, “over and over” was kind of how the whole book was. I understand why it was long – a relatively long life deserves its due page count – but so much of her long life was repetitive. That’s just how real life is, but even a faithful biography has to be edited; after the fifth repetition of how she gossiped to her advantage, acquired beautiful art, intentionally maintained mystery, I started to find my attention wandering frequently. (Especially because I couldn’t tell if this repetition was unique to how she maintained power or if it was just because lives, or courtesans’ lives in particular?, were repetitive.)

This is one of those books that kind of tries to make its subject Indicative Of The Times, and giving short shrift to The Times makes her repeating pattern of life, well, more boring.

Exacerbating this is how fast the author glossed over major political events. I get that as a courtesan, even a politically connected one, she didn’t have any real power in many of these events, and when she did it was covered, but this is one of those books that kind of tries to make its subject Indicative Of The Times, and giving short shrift to The Times makes her repeating pattern of life, well, more boring. I would rather read about her powerlessness, even if it didn’t flatter her, than another story of a client admiring her fancy bed.

The clearest example of this was the Dreyfuss Affair. While I obviously have somewhat of a vested interest here, I think this was a missed opportunity because of the key players. Emile Zola was mentioned so often and prominently in the first half of the book with his writing of Nana that his contribution to the Dreyfuss Affair was notably missing – J’Accuse was a major point of that event in history and if the book posited that part of what made Valtesse important was consorting with the political and historical elite of Paris, this would go a long way to bringing that point home.

I grant some of this may be my own still-middling feelings about nonfiction, which even as my appetite grows is always kind of on the fence. In fact, in fact-checking this post I spotted mostly wonderful reviews of this book, which leads me to believe I still have a lower tolerance for some of the things that are inherent in nonfiction than I thought. However, no matter my boredom with the prose, the recitation of art pieces, the avoidance of any subject that made Valtesse seem weak or unlikable, the woman in question was a fascinating figure. It’s just that the book mainly felt like it couldn’t decide what to do about her: provide an example of the life of a courtesan in 19th century Paris? or show how this unique courtesan broke the mold?