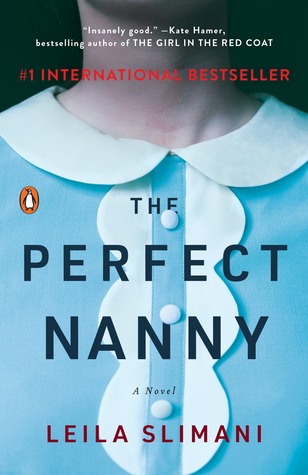 IF YOU LIKED
The Nanny Diaries

One of my favorite books of all time is The Nanny Diaries.* It was the first time I read about the parent-nanny relationship and I’ve found it fascinating ever since. As a daycare child myself, I never had a nanny, and the closest I came were after-school babysitters when I was old enough, but the relationship is entirely different. A babysitter hangs out and makes sure kids don’t kill themselves until their parents get home. A nanny helps parents raise the children. When I worked at a daycare for a few summers, there were kids who loved seeing their nannies and barely reacted for their moms, just like the stereotypes (and there were those who loved both equally, unlike the stereotype). As an adult, I’ve watched people I know have children and decide between daycare and nanny.

This book was compared to Gone Girl, because what book isn’t nowadays (more on this later), but it reminded me so much more strongly of The Nanny Diaries. Obviously, nannies feature prominently in both. But more than just including a profession, they also both are primarily focused on how these parents and nannies essentially fight for control of children, which is really fighting for control of parenthood – and in both, how condescension is weaponized specifically when class is involved, especially in this book, in which the attacks go both ways.

It’s not a 1:1 comparison (if nothing else, The Nanny Diaries does not include murder). Myriam is obviously a more likable and better person than Mrs. X and she is truly conflicted about what it is to be a mother but also try to still be a person in her own right, which is something all mothers (I imagine) struggle with. She’s also struggling with a husband who dismisses her concerns – the rage I felt when he brushed off the chicken carcass was so strong! It’s an obvious dominance move and he can’t even see it, because it’s coming from a woman, and coming from “the help.”

Women in this book are complicated, dark, sometimes scary people. That is, however, where the similarities to Gone Girl end. Not to spend this review talking mostly about books that are not this one, but I am so sick and tired of seeing “the French Gone Girl!” or “the next Gone Girl!” Women in novels have been complex, dark, unreliable, or cruel for a long ass time, and they will continue to be. I thank Gillian Flynn for making the phenomenon popular, but a book including a woman who is given room for anger and rage and pain and cruelty is not therefore Gone Girl.

This book is taut, suspenseful, but essentially a small family drama that almost feels like a play. Myriam and Louise are nothing like Amy Dunne and they deserve the respect of being allowed to stand on their own merits and demerits. In this novel there’s no sudden twist or reveal, just a race towards the tragedy that ends the book, which of course also opened the book. It’s a scary portrait of motherhood and nannyhood, and how those two poles come close, repel, escape, and return to each other.

*In seeing if I ever wrote a review of The Nanny Diaries, I found that apparently people hate this book, or like it “despite” or “because” it’s chick lit. I find it hard to believe that if a man wrote a scathing satirical novel about being, idk, a personal trainer to the uber-rich, people would be slamming it quite so hard. We all know my feelings on chick lit or guilty pleasures or what the fuck ever, but I was shocked at how much people really hate this book!