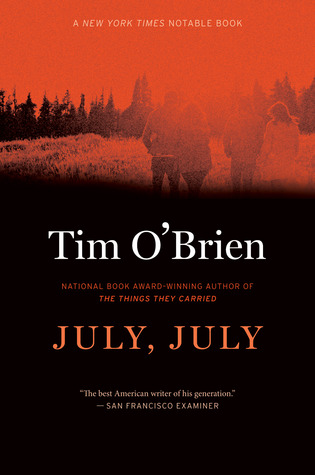 My mom is a music historian and professor, and when I was little and I stayed home sick from school, I would sit in on the classes she taught. One of these times she was teaching Maurice Ravel’s Bolero, which has remained one of my favorite pieces of music. She said to her class that the Bolero was, the encapsulation of a single, sustained crescendo.

This book is essentially the encapsulation of a flashback. Tim O’Brien is always a lyrical and evocative writer, but he is uniquely able in this book to sustain the feeling of a flashback. I would make the argument also that a flashback is different than books that change timeframes throughout – O’Brien gives his sections in the past the feeling of being anchored to the present, and the cliched feeling of memories coming “rushing back.”

Of the Tim O’Brien books I’ve read this feels the least comfortable for him, as it’s (I think) less-trod territory (disclaimer that I’ve never read Tomcat in Love), and as such it’s a little uneven. All the characters feel well-defined and sharp in terms of personality and history, but the flashbacks of some are more nuanced and complex than others. (David’s war chapters and Billy’s draft dodging chapters are, perhaps obviously, some of the best.) However, this is a quibble born of knowing Tim O’Brien is an incredible writer whom I trust; with someone else this probably wouldn’t even register.

I wasn’t in college in the 70s, obviously, and I don’t think I’ll attend my college reunion (though you never know). I certainly didn’t have the overlapping entanglements with my circle of friends like the ones in this book. But I imagine if I did, attending a reunion after 31 years would feel an awful lot like this: formerly idealistic, unrealistic, naive kids who are exactly who you thought they’d turn out to be, and/or slightly disappointing – kind of like a predictable reunion, off kilter because of a year’s delay and ending mostly how it began – frustrating, unsatisfying, unchanged