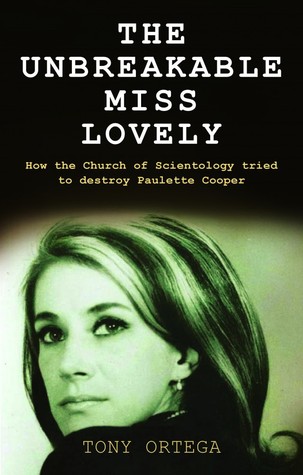 The Unbreakable Miss Lovely: How the Church of Scientology tried to destroy Paulette Cooper

IF YOU LIKED
Going Clear

I feel like I usually start Scientology book reviews by saying “As everyone knows, I’ve read a lot about Scientology…”. That’s still true of course – I even keep (loose) track of what I’ve read on a dedicated page on my site. So oftentimes, I know a lot of the content of these books going in. There’s always something surprising, or some detail I didn’t know, which is why I keep reading them (and plus, since it’s still around, there’s always new news).

But I must say, this book was one of the freshest pieces of writing on Scientology I’ve ever consumed. I was struck, for instance, on page 352, when the e-meter was mentioned for the first time. I hadn’t even noticed its absence, despite normally being one of the first things covered in a book about Scientology! I think that’s indicative about how this book covers the church. It’s both a specific profile of the litigious and vengeful nature of Scientology, but also a biography of Paulette Cooper. Given how often Scientology is defensive over its religious status, this book begs the question: if these are the behaviors they engage in – espionage, harassment, manipulation, secrecy, theft, etc. – does their religious status matter? And to take it a step further, if we do accept Scientology’s legitimacy as a religion, don’t those activities make it a fundamentally corrupt & immoral religion?

What it needed to be – and what it succeeded in being – was a highly personal story.

Even without a preexisting interest in Scientology, I think many readers would find themselves fascinated by this story, and charmed by Paulette Cooper. Ortega writes about her in very convincing, human ways – she is brave, ambitious, driven, and intelligent, but also impulsive, often overtrusting, and often understandably spiteful. This grounded portrayal is what makes the rest of the book so believable. Or rather, because I knew some of the story going in and wasn’t inclined to skepticism, it drove home just how surreal the experience must have been for her. (The book reads like a thriller in many places, but none more so than when Bast tells Paulette his client is a “Swiss man” and asks to tape her conversations. Without Ortega having to spell it out (too) explicitly, the reader is aware that once again, Paulette has been duped, and you want to yell at Paulette through pages, and time, to get the fuck out of there.)

Paulette’s is a story that deserves to be told, in full and in detail and with compassion, and this book does just that. Ortega clearly cares about the truth and about the church, but also about Paulette, telling the story of how she survived the Holocaust and her prolific non-Scientology writing along with her years of harassment, making sure Paulette is shown as a whole person, not just a victim of a horrific campaign. This isn’t an objective history along the lines of Going Clear, but unlike so much writing about Scientology, it doesn’t need to be. What it needed to be – and what it succeeded in being – was a highly personal story, and I think Ortega did it justice.